The ATOM (Art to Many) Project:
Access to Art and Design Integrative Learning in Rural India

​ATOM | Art to Many is a mobile art toolkit which includes teacher and student resources. ATOM arose from belief that art experiences should be provided to students on a consistent and sustainable basis.  But the lack of art and design education access to disadvantaged children is not just a developing nation issue, but a global phenomenon as cited by UNESCO (2006).   ATOM is developed for the world’s poorest children who attend schools with no art classes, no art teachers and no money for art supplies.

​The ATOM Project explored how to bring creative, artistic and design thinking to rural education in the Villupuram District of Tamil Nadu, India.

In 2010, while investigating the failure of a boutique flooring product called Just involving InterfaceFlor, Industree Crafts Foundation, and grass mat weavers in rural Tamil Nadu, India, I was struck by the relationship dynamics between the designers and the weavers involved in the project.  In the all-female weaver collective, girls started working with their mothers, as early as age 5, collecting and separating grass.  By age 14, girls would leave traditional education, and created mats based on traditional patterns handed down through generations.  In the creation of Just, new patterns were created by trained textile designers coming from Europe, with the collective working on the technical aspects of production.  What if the 14 year old weaver had access to the design process and methods used by trained textile designers to further her education and the future of this collective?

Our team included our client Betsy McCoy and two of her staff in Villupuram, India, ten design students from the Professional Diploma program from Srishti School of Art Design and Technology and one graduate researcher, Lopah Shaw, from the Center for Research, Training and Development at Srishti School of Art, Design & Technology in Bangalore, India.  The project was funded through contributions to Communities Rising and through a Fulbright-Nehru Fellowship.​

Exploration: Ideation, Mind Mapping and Memory Play
We began our exploration of art and learning through the types of art students-designers made whether through an organized class, sitting around the kitchen table, with friends, or through free play. Student-designers were asked to contemplate the following questions:The ideation process took place as each component of the ATOM project was considered.  From brainstorming, mind mapping and visualization can we tap art making memories: visual, verbal and kinesthetic.  ​
Experimentation provides an opportunity to explore possible lines of thought and material manifestations.  By doing we can empathize with the perspective of the end-user whether it be a teacher, student or parent.  Below the Srishti design students worked on their proposals for the art projects that they facilitated at Communities Rising, Inc sites. This process helped student designers to play with the opportunities that the materials offer and to outline the steps which they communicated to the teachers and students at the Communities Rising site.
Contextual Research: Field Visits, Observations and Interviews
Interaction with an end-user or fabricator is key to the success of any project.  Creating an understanding of capacities, talents, opportunities, culture and history are among a few of the areas needed for consideration.  Here, we spent two mornings visiting the tailoring and silk screening center who was run by the Communities Rising's part-time art teacher, Sagayaraj,  This is also a learning center where local village women learn how to sew, embroider and weave.  By the time the student tailors have completed their training they have learned valuable skills to make additional income to support their families.  We exchanged new and old ways of thinking regarding material use, and construction techniques.
Field Visit narratives below were written by the Sristi design students as part of the blog diary.
"Through the Field Visits we had many opportunities to work directly with the students of Communities Rising, Inc.  This is a group of enthusiastic 4th and 5th grade standard children ages 9 to 11.  Many of these children had never used scissors before.  Many children at first wanted the Srishti facilitators (design students) to do the work for them.  In very little time the children realized that the Srishti facilitators were not so much interested in the rightness of the completed work, but in the exploration of the medium.  Once the children understood they took on the art making with great enthusiasm and creativity." 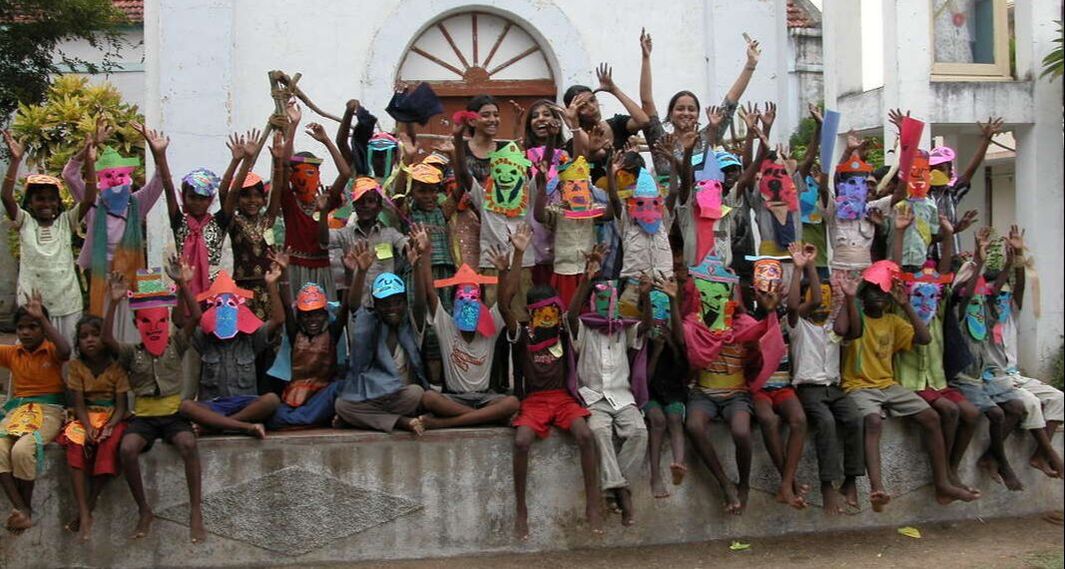 Activity One: Tie Die
"On the 4th of August 2011 at around half past two we arrived at a school called R.C. Todagapalli. We were the first group to conduct an art session in Villupuram for Communities Rising.  We had around 70 children eager to do the activities prepared for them.  It was very surprising that the children didn’t know how to use scissors. During kite making we required them to stick the bamboo frame onto the paper and cut the diamond shape around it. Some of the children didn’t understand how to apply the sticky side of the tape down and most of them didn’t know how to use scissors. They were all very excited about using scissors and the fevicol glue. They enjoyed the kite decorations of glitter and stickers. Some kids tried sticking on their names using letters from the alphabet while others used the glitter not only on their kites but also on the tie and dye and on their own clothes and faces!"
Activity 2: Kite Making
"We cut out small square patches of cloth before we reached the site. Once we were there, we taught them, how to tie the thread around the cloth, and other options of making patterns, where in they could tie stones in the cloth with the thread if they wanted. Most of the children were experimental and came up with interesting designs, though some decided to stick to the exact same way in which they were taught.
Soon after, they were all really excited to dip their cloth in paint, and dip it several times in different colours.
After that,all the children put their pieces of cloth to dry together. They were pretty excited to open it soon after, even though it wasn’t dry. The designs that came out of it were pretty interesting and intelligent, keeping in mind that this was their first tie and dye activity."
Activity 3 Paper Marbling
​"Paper marbling turned into a filler activity that took place as the children waited for their tie and dye to dry and ran to the tub where paper marbling was taking place with multiple sheets of paper. The activity was demonstrated to them once after which they all made a long line and one-by-one came to the tub to dip their sheets in. All the girls wanted pink and all the boys wanted black! There was some glitter paint as well which caught the girls’ fancy and it was shyly requested for multiple times. The children loved the activity as it was really short and they saw results instantly."
Activity 4 Mask Making
"After the warm up, the kids were divided into four groups. Each group had a facilitator and was given different kinds of material to work with. We started with introductions and actions. We wore our costumes and masks and got into character to show the kids what had to be done. Slowly they got a hang of it and chose their roles. Some wanted to be kings, some chose to be men with mustaches, snakes, trees, cats etc. "​
Observation Diary
The most personal reflection of the trip to Villupuram is contained in each Srishti design student's diary of the event.  Some are detailed with copious notes that explain every feeling and others are beautiful collages of thoughts, memories and images.  Each diary serves as a touchstone and reference as the ATOM project progressed.

Field Visit Summary: What Defines and Artist?
As part of our research, a team documented out site visits to the Communities Rising Programs. This video provides a glimpse into the context and findings from our visit.

What Defines an Artist from Kathleen M Fritz on Vimeo.

SWOT Analysis
Each team created an art activity lesson to conduct while at Villupuram.  Upon our return each group compared their pre-trip ideas for the art lesson and their experience of their activity day post-trip.  This type of analysis is important to self-evaluate the SWOT of the activity and provide for further development contributing to the prototyping of the end product.  On our last day in Villupuram, we created a SWOT analysis which looked at the Strengths, Weaknesses, Opportunities and Threats for the creation and success of the ATOM project.  The main take-aways were:​
End-User Identification
During our trip we identified three end-users of the project: 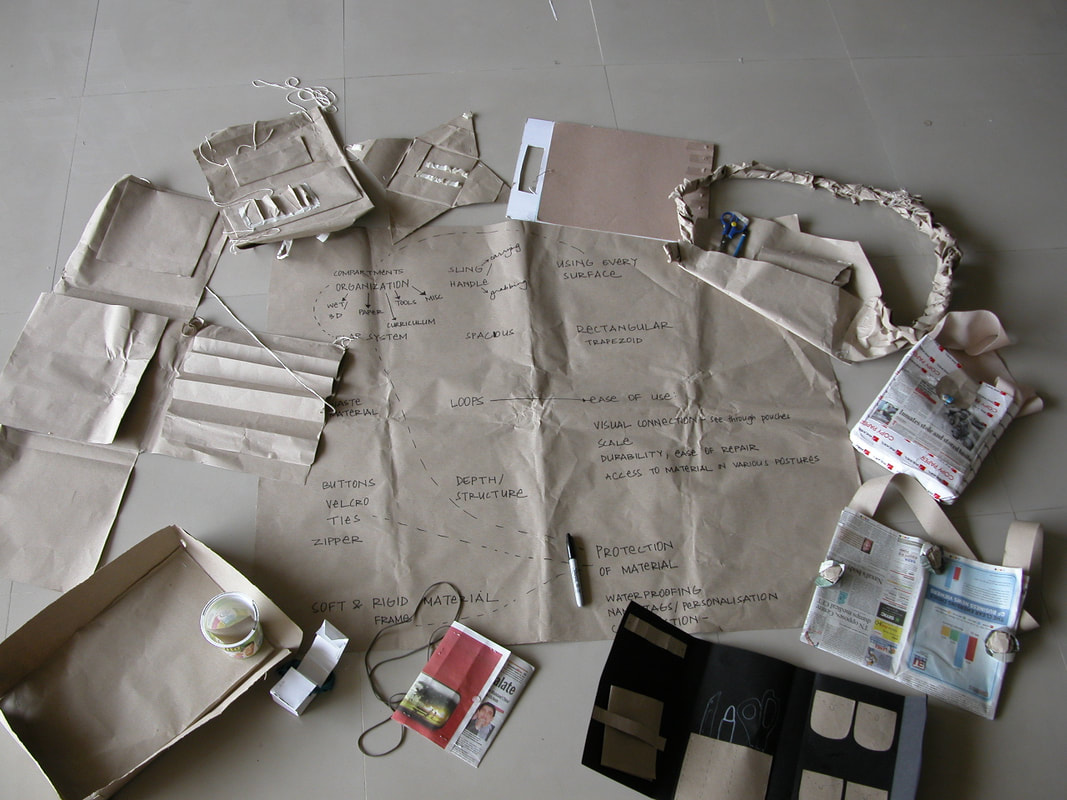 Paper Prototyping of Carrying Case
Final Version of the Lesson Plan Cards and Art Supply Cases for Teachers and Students
The prototypes were delivered to Communities Rising Center in Villipuram, Tamil Nadu, India in December of 2011.  Over the following months the bags were constructed by the local tailoring center and the translation of the teacher's manual was completed by staff at Communities Rising and two student designers at Srishti.  Written materials were in English and Tamil.

September 2012 The Atom Project was delivered to teachers during a week of teacher training in the art and design integrated toolkit and in art techniques required to successfully implement the activities at the out-of-school programs.
Copyright © 2022